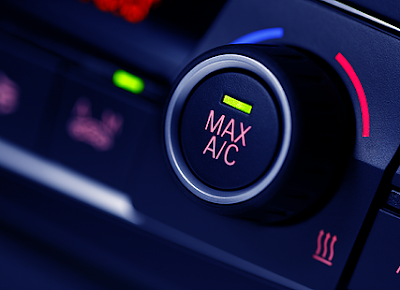 A vehicle's air conditioning (A/C) system cools the air in your vehicle, and the heater warms it up. Without the heating and air conditioning systems in today’s vehicles, we wouldn't all be willing to drive while freezing during the winter season or melting under the warm summer heat.

The heater in your car is basically a smaller version of your cooling system's radiator. Hot engine coolant is circulated through a small radiator, often times called a heater core. A fan is positioned in front of the heater core to blow cold outside air over the fins. As this air travels over the heater core, it heats up and becomes the hot air which blows out your heater vents.

Like your engines cooling system radiator, the heater core can suffer some of the same issues. If the heater core becomes clogged with rust or sludge, you will no longer have heat. Also, leaks can cause a cabin full of white steam and really mess up your windows. If you are able to smell the coolant when your heater is on, then there is a chance you have a small leak in the heater core. Sometimes, the heater core is buried under the dashboard, and replacing it, is a major job since it takes time and the costs increases.

The air conditioning system in your car is comprised of a compressor, condenser, expansion valve and evaporator. If you have ever used a can of compressed air to clean computer components, you will know that the bottle gets very cold in a short amount of time. This is due to the rapid expansion of compressed gas. The same thing happens in your car’s air conditioning system. The refrigerant is compressed in the compressor and turns into a hot gas. In the condenser, this hot gas is cooled to a liquid state and travels to the expansion valve. As the Freon goes through the expansion valve it returns to a low-pressure gas and rapidly cools in the evaporator.
at July 19, 2018

If you are looking for honest and reliable Canyon Country Auto Repair, our team of mechanics are here to help! Here are links to some of our most popular auto services: Brake Repair, Diesel Repair, Transmission Repair. Give us a call for all of your auto servicing and preventative maintenance needs.